The Long and the Short of it

NEWPORT, R.I., USA (June 16, 2011) – The extremes of crossing the Atlantic Ocean will be experienced very differently by crews on the longest and shortest yachts competing in the upcoming Transatlantic Race 2011 (TR 2011). This adventure challenge, which aims to add 2,975 nautical miles to its participants’ log books, is co-organized by the Royal Yacht Squadron, New York Yacht Club, Royal Ocean Racing Club and Storm Trysail Club. The TR 2011 starts off Castle Hill in Newport, R.I. (on Sunday, June 26; Wednesday, June 29; and Sunday, July 3) and expects to greet its first finisher off Lizard Point in South Cornwall (UK) sometime in mid-July, depending on many things, not the least of which are the lengths of the boats making the crossing.

On the one hand there is the Perini Navi designed Maltese Falcon, at 289 feet, one of the largest privately-owned sailboats in the world. On the other there are two Class 40s, which at 40 feet are specially designed for short-handed offshore and coastal racing. These extremes are punctuated by the fact that Maltese Falcon looks every bit the world cruiser, with stem-to-stern luxury incorporated into its design, while the Class 40s seem relatively stark–even like dinghies–in comparison. But each team at either end of the spectrum has its reasons for undertaking the TR2011 challenge, and each team intends to succeed, if not win.

“The experience of sailing on Maltese Falcon is incredible,” said the boat’s longtime captain Chris Gartner (Antibes, France). “Since there is no other boat in the world like it, it’s really a one-off. Every time I go sailing on her and we get her wound up, I’m almost in awe just looking up at the rigs.”

The yacht’s three self-standing and rotating carbon fiber masts, which carry 15 sails with a combined sail area the size of three and a half tennis courts (25,833 square feet), are of such an imposing height–190 feet, in fact—that recent visitors to Newport have experienced “the Falcon” at almost eye level as they’ve crossed the 206’ high Claiborne Pell Bridge, which serves as the gateway to Narragansett Bay and its adjacent Newport Harbor. With its long waterline and such magnificent sail power, Gartner thinks Maltese Falcon has a good chance to win, but “it’s hit or miss with the weather,” he says. “If we get good pressure coming up behind us and we stay with it, we could finish this race nicely.”

Gartner added that logging 500-mile days would make Maltese Falcon’s voyage about six days, but longer is more likely. “If we do it in less than 12, I would be very happy,” he said, noting that the World Sailing Speed Record Council will ratify a new Newport to Lizard Point race record based on the fastest yacht’s elapsed time.

And while Maltese Falcon will be dry and comfortable, and sailing with a large crew, the two Class 40s will be roughing it with minimum comfort, eating freeze-dried food and sailing with anywhere from two to six onboard.

Team Concise was set up four years ago by owner Tony Lawson (Haslemere, UK) specifically to encourage and develop young British offshore sailors and will be entered in the TR 2011’s challenge for the Youth Trophy. His team of six (the maximum for the Class 40) will be skippered by Ned Collier-Wakefield (Oxford, UK).

“We sail six-up when allowed simply to give the largest number of young sailors a chance to do these big races,” said Lawson, explaining that the Class 40, built to a box rule and considered the world’s fastest growing offshore class, is designed for short-handed sailing, but several of the events on the class’s calendar are fully crewed. “So far, Concise teams have won the Class 40 World Championships, broken the Sevenstar Round Britain and Ireland Race record for a 40-foot boat, and twice set a new Class 40 course record at the RORC Caribbean 600.” 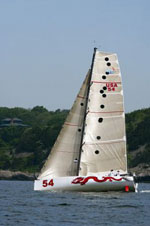 Sailing double-handed in the Class 40 division will be Michael Hennessey (Mystic, Conn.) on Dragon (pictured at right)

“Just me and one other guy (co-skipper Rob Windsor) – less people to get along with,” joked Hennessey, adding seriously, “We’ll be on deck at the same time for sail changes, but otherwise it’s typically two hours on, two hours off.”

Hennessey was encouraged that in April of this year a Class 40, skippered by Eric Defert, sailed from Ambrose Light (off Sandy Hook, NJ) to Lizard Point (a distance of 2880 miles) in 11 days and 11 hours.

“That sort of sets the benchmark at the bottom end of the range; however, Eric was able to pick his weather system,” said Hennessey. “I would be thrilled with anything less than 12 days. I’m realistically expecting 13 to 14 days, and upper end who knows? It’s up to the weather gods.” As for plotting Dragon’s course relative to the rest of the fleet scheduled for the June 29 start (that includes Maltese Falcon), Hennessey said, “We’ll be most conscious of where Concise 2 is, as she is our pace horse, if you will. For the rest of the fleet, I think it really depends on how the IRC (handicap rating) spread looks.”

There are 26 entries sailing in the TR 2011, with the U.S. fielding 10 teams, Germany six, the UK four, and South Africa, St. Barth’s, Italy, Monaco, China and Lithuania one each. The yachts will be tracked with Yellowbrick Trackers, self contained units that transmit the position of each boat at regular intervals using GPS and Iridium (a global satellite phone network). Synchronized position reports will be available to the public by using the Race Player Application at the www.transatlanticrace.org website, where regular race reports will appear and Facebook and Twitter accounts are linked. As well, throughout their journeys, many of the boats will be posting blogs and sending back photos and videos to the race website, so race fans can be further assured of an up-close and personal experience with the teams and the racing action.

Sponsors of the TR 2011 are Rolex, Thomson Reuters, Newport Shipyard, Perini Navi, and Peters & May.

For transcripts of interviews conducted by Gary Jobson at the Panel Discussion and Press Conference hosted by Thomson Reuters, go to transatlanticrace.com/news/panel-discussion.html. (Chris Gartner of Maltese Falcon and Michael Hennessey of Dragon are included).

More About the Sponsors

Rolex – Rolex, with its headquarters in Geneva, Switzerland, is one of the world's foremost watchmakers, with an unrivalled reputation for quality craftsmanship. Since its inception in the early 1900s, Rolex has introduced a series of revolutionary innovations, from the first waterproof watch, the Oyster, in 1926, to the first self-winding watch in 1931. This distinguished timepiece is treasured by individuals in every lifestyle. Rolex has always enjoyed a privileged relationship with the sea, the world of sailing and the call of the deep. The spirit and philosophy of the sport are in perfect harmony with values that Rolex holds dear: excellence, precision and team spirit. www.rolex.com

Thomson Reuters – Thomson Reuters is the world's leading source of intelligent information for businesses and professionals. It combines industry expertise with innovative technology to deliver critical information to leading decision makers in the financial, legal, tax and accounting, healthcare and science and media markets, powered by the world's most trusted news organization. With headquarters in New York and major operations in London and Eagan, Minnesota, Thomson Reuters employs 55,000 people and operates in over 100 countries. Thomson Reuters shares are listed on the Toronto and New York Stock Exchanges (symbol: TRI). www.thomsonreuters.com

Newport Shipyard – Newport Shipyard is unquestionably the center of New England sailing action and this year is no exception with the classic J boats from the 1930s, the Transatlantic Race 2011 and the 25th anniversary of the Bucket. For the most glamorous yachts this side of the Med, downtown dockage, lifts, a dedicated workforce, and every convenience from Belle's Café to a gym, visit www.NewportShipyard.com

Perini Navi – Perini Navi is leader in the design and manufacture of blue-water sailing yachts. Famous for their revolutionary automatic sail handling systems and for their unique aesthetics, Perini Navi yachts are among the most celebrated vessels in the world. The company was established in 1982 thanks to the intuition of its founder, Fabio Perini. His great passion for the sea gave him the idea of creating a new breed of sailing yacht, one that could be handled by a single person thanks to a revolutionary sail management system, which is today the state of the art of sailing. www.perininavi.com

Peters & May – Leading global marine logistics specialist Peters & May ships over 8,000 boats annually worldwide, by air, sea and road. Peters & May offers transportation solutions for any size of yacht and is the preferred logistics provider of many of the world's premier events and yacht racing teams, transporting yachts, equipment, containers and masts to all international destinations. www.petersandmay.com