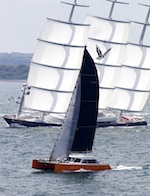 Newport, R.I. USA (June 29, 2011) – This morning, the tension was mounting dockside as 14 yachts made final preparations before they took the second start of the Transatlantic Race 2011 in a spectacular scene full of drama.

With a huge number of spectator boats gathered to see the fleet off, the breeze started to build just as the first warning signal sounded from the Castle Hill Light at 13:50 Eastern Daylight Time. A freshening southwesterly caught several competitors off-guard, resulting in three boats -- Scho-ka-kola, Concise 2 and Jazz -- being called over the line at the start. Jazz returned almost immediately, however, Concise 2 and Scho-ka-kola continued to race and it was nearly half an hour before these two yachts returned to cross the line correctly.

Concise 2 is one of two Class 40s in the fleet, and the eagerness of its young crew gave Dragon, which is being sailed double-handed by Michael Hennesy (Mystic, Conn.) and Rob Windsor (East Northport, N.Y.), an early lead in the class – by the time Concise restarted, Dragon was 4.5 miles ahead. No doubt the Concise crew will be digging deep to make up for lost time.

Jazz, the Cookson 50 skippered by Nigel King (Lymington, U.K.), came back very strongly after their premature start. Navigator Mike Broughton (Hamble, U.K.), speaking dockside just an hour before the start, believes it will be an interesting first night. “The cold front should come through as we go around the Nantucket Shoals, and how we play that could be pretty much a key area. I am seeing a bit of coastal racing for this ocean race. This is a fascinating racecourse and has been for hundreds of years. The conditions are the same now as they have been for all those years…the jet stream, the low pressure systems, the Gulf Stream. Many of the grand prix offshore events can be broken down into a series of legs, but this one is more like trying to hit a moving target; trying to work out where you want to go and when that pressure will get there.”

In IRC Class Two, Christoph Avenarius and Gorm Gondesen’s Shakti and Jens Kellinghusen’s Varuna have begun their battle within the race. Both yachts are from Germany and have exactly the same hull, however, there are subtle differences between the two yachts as Shakti’s tactician, Bendix Hügelmann (Hamburg, Germany) explained before the start. “Varuna has more sail area and weight in her keel, which should give them an advantage in heavier conditions. However, we recently raced each other and there was little difference in speed between us. Two days ago, the crews of both Shakti and Varuna had dinner together. We hope to make each other go faster by our close competition, rather than slow each other down. It is also very useful to have another yacht close by, should we need assistance in an emergency. We will be pushing Shakti to win, but safety is always the most important aspect of any yacht race.”

In IRC Class Three, the Reichel Pugh 66 Zaraffa made the best start. Owner Huntington Sheldon (Shelburne, Vt.), at 80 years of age, is believed to be the oldest competitor in the Transatlantic Race 2011, and has a crack crew on board including Axel Maghdal (Norway), Richard Mason (New Zealand), Jens Dolmer (Denmark) and Matt Humphries (England), all of whom have all competed in the Volvo Ocean Race. “This is a professionally run team and Zaraffa won the Transatlantic in 2003 and a lot of people said that was a fluke,” said a defiant Sheldon just hours before the start. “I aim to prove those people wrong.” From the way Zaraffa started it looks as though the team mean business.

The team on the Volvo 60 Ambersail is proud to be the first-ever Lithuanian yacht to compete in a Transatlantic Race. “To see the Lithuanian flag at the New York Yacht Club was very special,” said skipper Simonas Steponavicius (Vilnius, Lithuania) just hours before the start. “The sail number of Ambersail is LTU 1000, which was chosen as it signifies one thousand years of our country’s history. This is a very proud moment for the crew and also for our country. We wish all of the competitors good luck and fair winds for the race.”

Notably absent from the starting area was Chris Frost’s (Durban, South Africa) Prodigy. The 54’ canting-keeled yacht, which took line honors in the 2011 Cape to Rio yacht race (easily breaking the record set 40 years ago by Sir Robin Knox-Johnston’s Ocean Spirit), developed a technical problem just minutes before the start. The issue seems to have been resolved, however, as Prodigy set off on the race within an hour of the rest of the fleet.

While the first start of the day produced some high drama, the start for the two yachts in the Open Class was just as extraordinary. As the magnificent 298’ Maltese Falcon unfurled acres of canvas and entered the starting area, the Gunboat 66, Phaedo, owned by Lloyd Thornburg (St. Barthelemy) was dwarfed in comparison. Phaedo is one of the world’s most head-turning maritime creations and the carbon fibre, Lamborghini-orange catamaran has become one of the most well-known yachts on the regatta circuit. However, the spectacle of the Art Deco giant, Maltese Falcon, dominated the proceedings, announcing its intentions with a bone-rattling blast of colossal air-horns to warn spectator yachts that they were about to tack for the line. It was a full five minutes before the three rotating rigs, each weighing 30 tons, completed their revolutions and Maltese Falcon heeled over bound for the start of the Transatlantic Race 2011. Phaedo, however, was far more exuberant and timed the approach to perfection, coming up under Maltese Falcon. At first they were caught in the enormous wind shadow of their leviathan nemesis, but as Phaedo came out of the wind hole, gasping for air, the crew onboard hauled in the sheets. Pulling the trigger, Phaedo accelerated away from the opposition, but not for long. Weighing in at an unbelievable 1110 tons, Maltese Falcon soon overhauled Phaedo and the rest of the fleet in today’s start, achieving a boat speed of over 14 knots.

Today’s starters have a lot of ground to make up just to catch up with the six yachts that started on June 26. The yachts in IRC Class 4 and the classic yacht Nordwind have a 400 mile head start. Star of the show in the leading pack is the McCurdy and Rhodes 48, Carina, skippered by Rives Potts, Jr. (Essex, Conn.). Carina is the closest yacht to The Lizard finish – albeit with 2360 miles to go to finish this epic race.