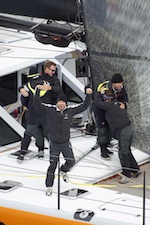 Newport, R.I. USA (July 12, 2011) – Dreams -- of deep sleep and wholesome food -- have come true, as three more Transatlantic Race 2011 class winners arrived at The Lizard in the south of England today. While the sailors have put to an end the days of going without, memories of the adventure will linger forever.

Just after sunrise Zaraffa, a Reichel Pugh 65, passed The Lizard to finish the Transatlantic Race 2011 with skipper Huntington Sheldon (Shelburne, Vt.), who, at age 80, is believed to be the oldest competitor in the race. Zaraffa completed the 2,975 nautical mile course in less than 12 days and was over 400 miles ahead of any other yacht in Class IRC Three, winning the class by a handsome margin. Notably, on Zaraffa, Sheldon took both line honors and the overall win of the 2003 Daimler Chrysler North Atlantic Challenge, which also started in Newport, but finished in Hamburg, Germany [with a course time of 13 days, 15 hours, 7 minutes and 28 seconds]. He subsequently donated the yacht to the U.S. Naval Academy (Annapolis, Md.) and chartered it back for this event.

In the two-boat Open Class, Lloyd Thornburg (St. Barthelemy), skipper of the Gunboat 66 Phaedo, was ecstatic when the Lamborghini-orange multihull crossed the finish line in light air. With a 100-mile lead, Phaedo was the victor in a David and Goliath battle with the magnificent 289’ Maltese Falcon.

“It has been an epic adventure,” said Thornburg of the race via satellite phone. “We enjoyed the RORC Caribbean 600 so much and it [the Transatlantic Race 2011] just seemed like the next step. During the windy part of this race, we were screaming along in big seas. That was pretty exciting and sometimes hair-raising, especially when flying a hull at night!

The last few days, however, were slow. Fortunately, Phaedo has plenty of onboard entertainment -- I think our movie count was 25 films. “It has been a wild and amazing experience with some incredible memories. The highlights for me were seeing water so clean it was the color of blue Gatorade; and, when we were becalmed, we had a shark circling the boat which was very eerie. Crossing the Atlantic, you lose track of time and it gives you the feeling like you have gone into space. Now we are heading back to life on land; we are all looking forward to sleeping through the night and we are all tired of freeze-dried food. I think that we will all be tucking into a full English breakfast when we hit the dock at Southampton. Our hearts really go out to the boats that are still out there, some of them must be having a real rough time of it, knowing that it will be days before they get in.”

Jazz, Chris Bull’s Cookson 50 which is being skippered by Nigel King (Lymington, U.K.), was the fifth yacht to finish the Transatlantic Race 2011 and appears to have won IRC Class Two. “We set out with a clear goal to deliver a top sailing performance worthy of this team, regardless of the final result,” said King. “The guys have never wavered from the challenge and have done so with smiles all the way. Once again ocean racing shows to me why it is the ultimate challenge – it’s a total privilege to be the skipper of this team.” As Jazz approached the finish, several of the crew reflected on the best moments of the race across the Atlantic.

Navigator Mike Broughton (Hamble, U.K.) described “a marvelous minute of offshore racing” in his first sighting of a blue whale and the sight of dolphins riding a bow wave. “Uncharacteristically, I saw two of these magical mammals slightly misjudge their flight paths and tap the bobstay with their tails." Australian Brendan Garner (Victoria) felt privileged to have been given the opportunity to race across the North Atlantic. “A new experience for me was helming at 20 knots of boat speed, pitch black at night, heavy fog, three degrees of water temperature and the crew on iceberg watch. High adrenalin sailing.”

For Anthony “Ski” Haines (Cowes, U.K.), ocean racing at its very best was launching downwind in the mid-Atlantic at 20+ knots and “seeing the whole boat and crew working so well, to the point where we did not have to think about anything …except going as fast as possible.”
And, for a sailor making his first transatlantic crossing, it was a defining experience. “I have climbed my mountain,” said Christian Ripard (Valetta, Malta) after sailing almost 3,000 miles.

There remain 21 yachts out racing on the North Atlantic Ocean, including the S&S 42, Sasha. With over 800 miles to the finish, the beautiful, sleek yacht likely has a week more at sea. Skipper Albrecht Peters and his wife Erika (Hamburg, Germany) have owned and raced Sasha for over 30 years and have just two other crew onboard, Christine Beech and Ron Melton both from New Zealand. For many people three weeks at sea is a long time; the Albrecht’s, however, have sailed Sasha through more than 110,000 miles of ocean and are very much at home.﻿