Battle For The Podium 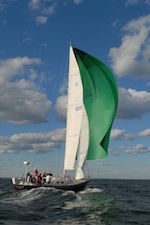 However, Sasha, skippered by Albrecht and Erika Peters (Munich, Germany), has until approximately 16:10 UTC on 17 July to bump Jacqueline IV out of the last podium position in the class, and, as of 10:00, had 63.4 miles to go and was making well over seven knots in northwesterly winds. The day’s spectacular conditions in the southwest approaches to The Lizard – 30 knots of wind gusting to near gale force with 15’ waves – will provide Sasha a wild downwind sleigh ride as the final finisher of The Transatlantic Race 2011.