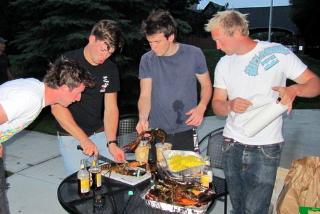 ONLY IN AMERICA !!!!!
Only in America could something we Brits consider a to be a luxury, lobster, be cheap as chips. Literally!
As most of the crew come from the Hamble where you have to take out a second mortgage for a lobster tail and with the fishing fleet moored up across the road from our crew house it was an opportunity not to be missed. Therefore, it was all hands on deck last night for a lobster Barbeque. Ned dispatched the catch (knife between the eyes ) under the watchful supervision of brain surgeon to be “Doc” Smedley. Press officer for the TR2011, Louay Habib took charge of the grill - Broiled lobster, tarragon butter sauce , corn on the cob, spinach salad with a raspberry dressing , washed down with a cheeky Chablis and all for less than you would pay for fish & chips in The Bugle, back home.

Our little feast marked the start of the final and focussed stage of race preparation . From now on the crew have to watch there diets (no more raw bar ) and hygiene really carefully . Lots of hand washing and common sense. No one wants to go racing offshore for two weeks with the flu or worse.