So, a challenging 12 hours onboard Concise. We gybed to the north late last night, a move which we knew would involve a bit of short term pain (in the form of light winds) but looking for longer term gains (much more consistent winds, and a better angle for our desired course). The pain ended up being sooner and more prolonged than we were expecting in the form of extremely light winds. The crew worked the boat hard with multiple sail changes between spinnaker, reacher and jib to make best use of the puffs as they came in from different directions. We had one false start with the wind seemingly filling in only to die again.

We are moving again but are not sure that we are through with the light winds for a few hours yet. Luckily, it looks from the latest positions that several our competitors are suffering a similar fate. As the first boat to head north, we are expecting that we will suffer the pain before the other boats, but hopefully get into better winds sooner also. But as we sat a few hours ago with sails flapping, it was sometimes hard to remember this!

The crew have made use of the lighter winds to freshen up both ourselves and the boat. Several people have stripped off down to their thermal underwear to air their base layers, and also get a bit of sun on their skin which has been covered up for most of the trip often by damp, salty clothing. Several sails are up on deck drying out and we’ve also taken the opportunity to do domestic chores such as decanting water from our large jerry cans into drinking size bottles. 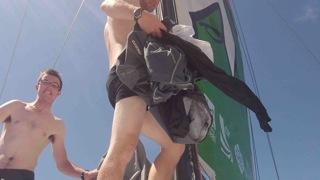