First of Three Starts: Off and Running! 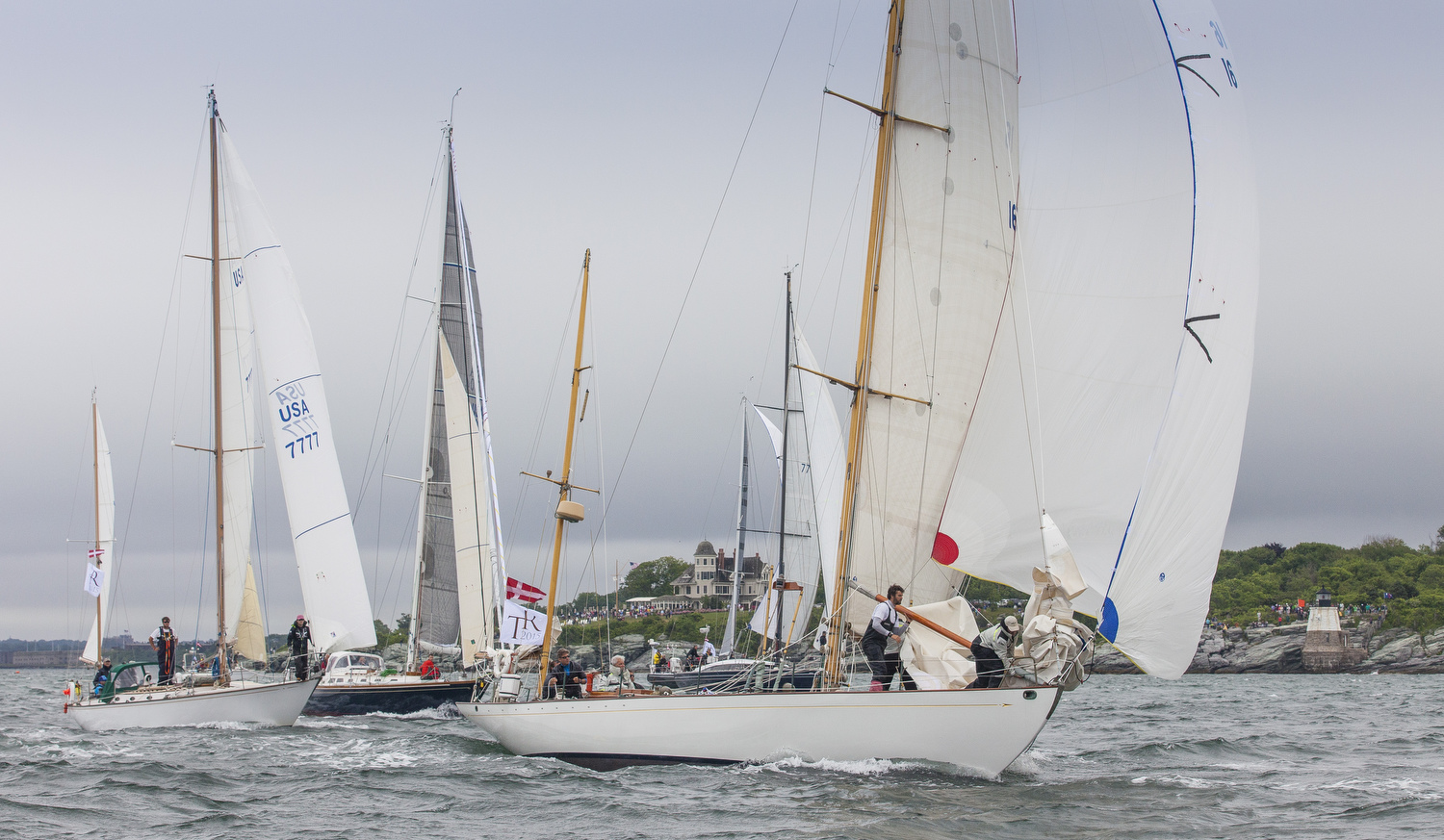 NEWPORT, R.I. (June 28, 2015) – An intense low-pressure system rolling up the Atlantic Coast put competitors and race officials on edge for the 48 hours leading up to the first start of the Transatlantic Race 2015, from Newport, R.I., to The Lizard off the southwest coast of England. Contingency plans were made by both groups, with the option of delaying the start for a few hours getting serious consideration. The storm passed through overnight, however, leaving behind excellent, albeit unseasonably cool, conditions and a favorable boost from the outgoing current and the run-off from Saturday night’s heavy rain.

A baker’s dozen of boats got underway in Start 1, crossing the starting line set off the Castle Hill Lighthouse at the entrance to Narragansett Bay’s East Passage just after 2 p.m. Twenty-one boats will get underway on the afternoon of Wednesday, July 1, and the four fastest yachts in the race will make up the final start on Sunday, July 5.

The boats in Start 1 were fairly conservative on their approach to the line. This race, at 2,800-miles in length, is the ultimate ocean marathon; slow and steady is almost always the best mindset for the onset of such an adventure, which could take two weeks, or longer, to complete.

“We will be happy if we finish the race in under 17 days,” said Sheila McCurdy, the navigator for Chris Otorowski’s Aphrodite, just prior to leaving the dock. “It’s looking like for the first half of the race, the weather is pretty advantageous – a mostly southwesterly blow. You’d have to peer out over two weeks to know how to approach England, but we don’t know that yet, because we don’t get weather forecasts that far in advance.”

Ross Applebey’s Scarlet Oyster was first across the starting line, hoisting a bright red spinnaker in time with the starting cannon and stretching away from the fleet. Next was Matt Brooks’ Dorade (above), the 85-year-old classic showing no hesitation. Brooks and his crew were quick to throw up a full complement of downwind sails and get the Olin Stephens’ design up to hull speed.

Approximately 90 minutes after the start, it was the 100-year-old, 140-foot schooner Mariette of 1915 that had charged to the front of the fleet—no surprise given it’s more than double the size of any other boat in the first start. Along with it were Mark Stevens’ Kiva; New York Yacht Club Commodore Rives Potts’ Carina (with Rich duMoulin skippering, since Potts had to stand down from the crew at the last minute), and Ross Applebey’s Scarlet Oyster. 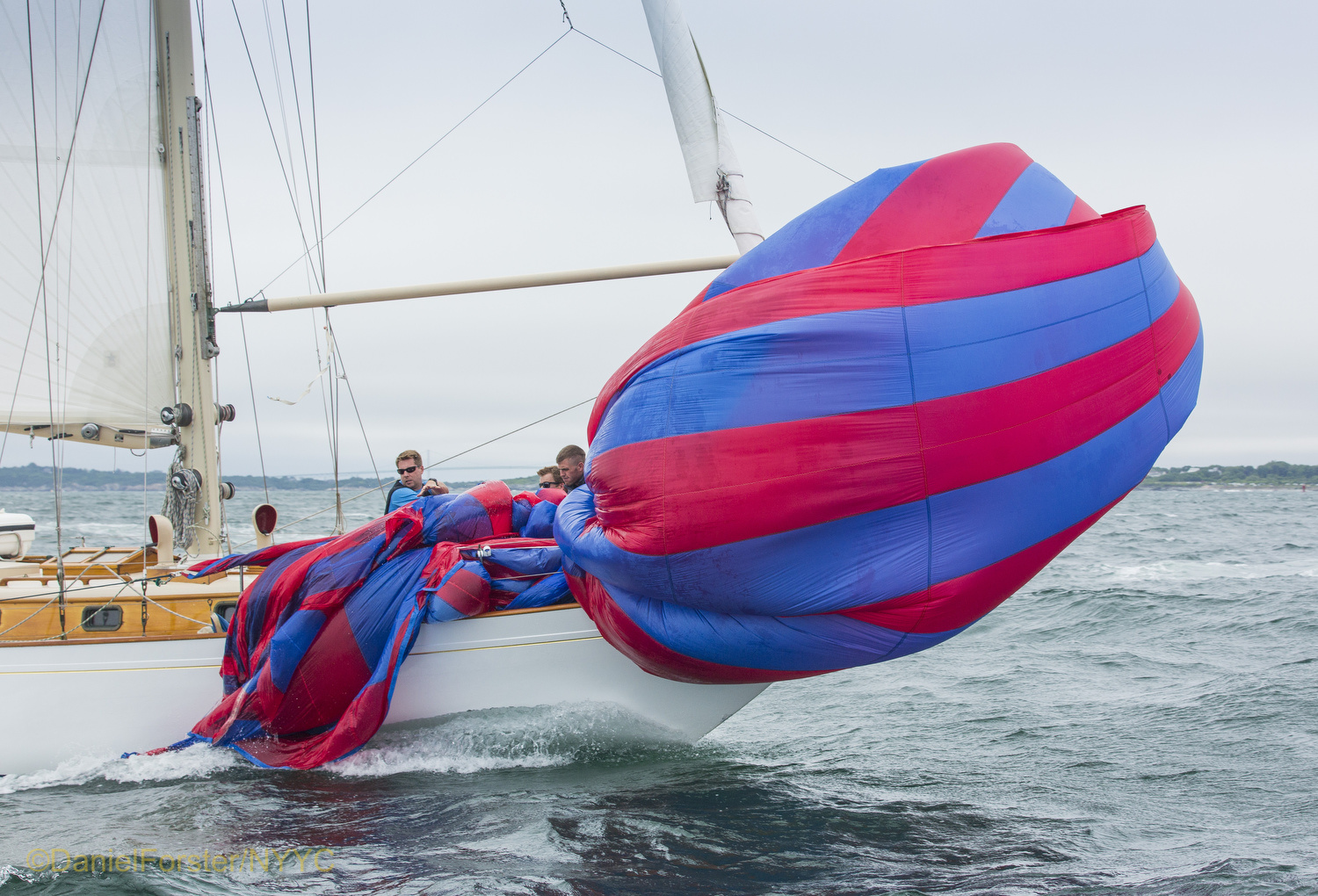 While most of the fleet seemed to enjoy the fresh conditions and following breeze, it wasn’t all wine and roses. Carter Bacon’s Solution (left) suffered a tear at the head of its spinnaker less than an hour into the race, the crew scrambling to pull the sail onboard after it fluttered away from the top of the rig. Other boats struggled to find their downwind rhythm in the large, off-axis ocean swells.

But no matter how the first few moments went, all the crews shared in the excitement of beginning such an epic adventure. The days leading up to such a long race are an overwhelming cocktail of planning, packing, boat preparation, speculation, training and social functions. Finally getting underway, and into the routine of an ocean race—a few hours on watch, a few hours off—is almost always a relief.

The fleet will sail in a southeasterly direction through the evening to clear beneath the Right Whale Critical Habitat area east of Nantucket. Then it will head due east for approximately 900 miles—to avoid an unusually large and widespread collection of icebergs on the Grand Banks of Newfoundland—before turning north to take the Great Circle Route, which cuts precious distance off any northern transatlantic trip.

Yellowbrick Tracking on tablet or smart phone – You must first download the YB Races app, then within the app, add the TR2015 race. There is no charge to follow this race. Apple iTunes https://itunes.apple.com/us/app/yb-races/id452193682?mt=8, Google Play/Android https://play.google.com/store/apps/details?id=com.yellowbrick.raceviewer&hl=en