NEWPORT, R.I. — In less than one month, on June 25, a fleet of 15 yachts will set off from Newport, R.I., on the 2019 Transatlantic Race. Among the entrants one stands out as a clear favorite for line honors in the 3,000-nautical mile race across the Pond – SHK Scallywag, the 100-foot super maxi skippered by David Witt, the well-traveled ocean racer from Sydney, Australia.

SHK Scallywag, backed by Hong Kong-based Seng Huang Lee and Sun Hung Kai & Co., recently won line honors in the Antigua-Bermuda Race, covering the 935-nautical-mile course in 3 days, 8 hours and 54 minutes. After seeing the speedo top out between 25 and 30 knots blast reaching on the first night, the race turned light for a stretch. Still, Witt said it offered valuable work on crew maneuvers and systems. 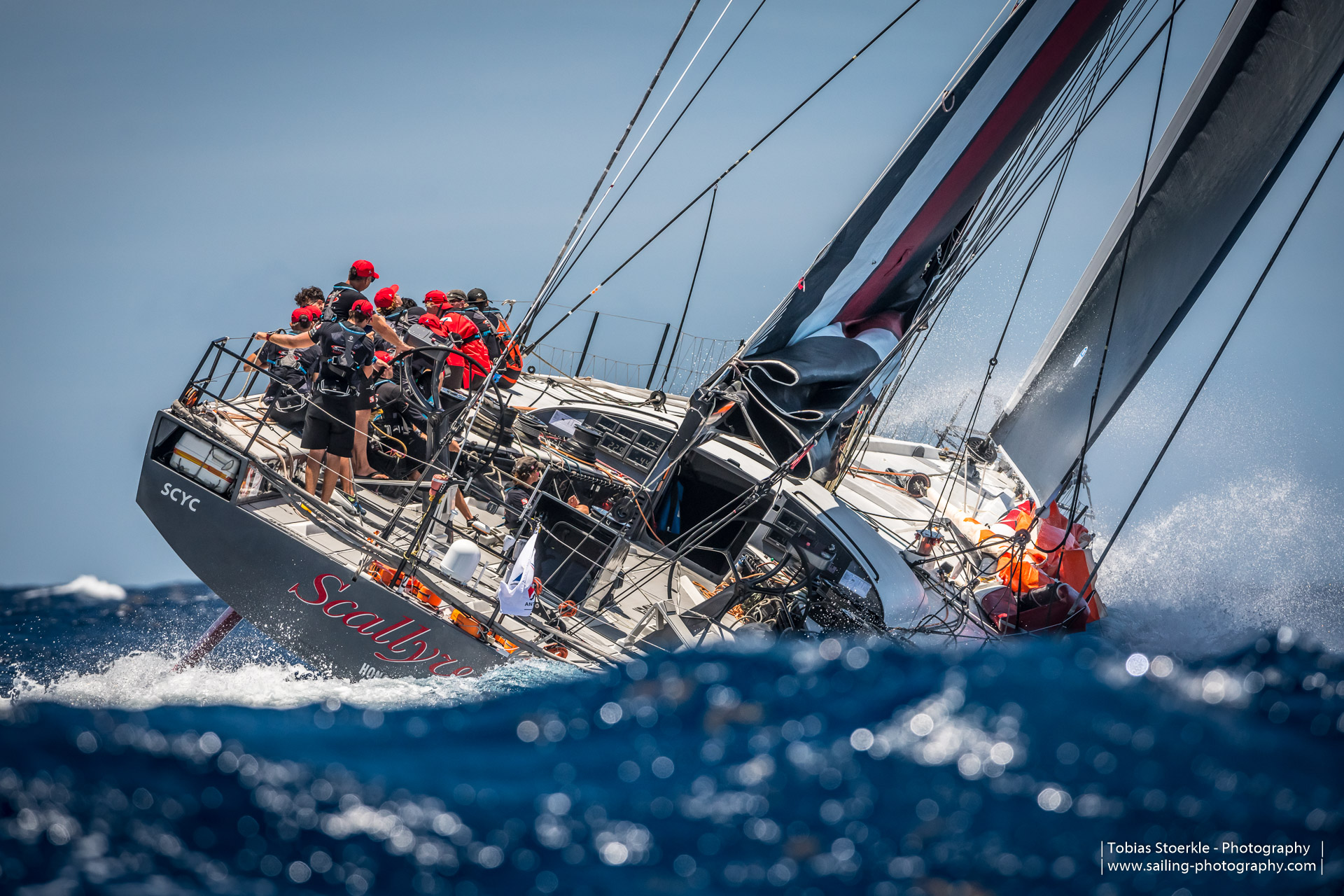 “It was good to do the Antigua-Bermuda Race, good to do a thousand-mile race,” said the 48-year-old Witt. “It helped us develop our crew work for the Transat, but it was quite light, a bit different from what the Transat will be. We’re looking forward to the challenge.”

After the start on the East Passage of Narragansett Bay, off Newport’s picturesque Castle Hill Lighthouse, this year’s race will finish off Cowes, which stretches the course length to 3,000 nautical miles. A gate will be established off Lizard Point, the traditional landfall for transatlantic crossings, through which the fleet must pass to preserve reference to the 2,975-nautical-mile course record of 6d:22h:18m:02s set by George David’s Rambler 100 in 2011 and recognized by the World Sailing Speed Record Council.

SHK Scallywag’s recent line honors accolade adds to an impressive list of distance race achievements for the design from Dovell Naval Architects (New South Wales, Australia). Launched in 2015 as Ragamuffin 100, the boat placed second and third in both the 2014 and ’15 Rolex Sydney Hobart Race, respectively, and third in the 2015 Transpac Race.

Racing as SHK Scallywagsince 2016, she took third in that year’s Hobart race and also set some point-to-point records in Southeast Asia, including the Hong Kong to Hainan Race and the San Fernando Race from Hong Kong to the Philippines by more than 15 hours.

SHK Scallywag is on a bit of a global tour, having raced in Les Voile de St. Barth prior to the Antigua-Bermuda Race. After the Transatlantic Race, SHK Scallywag will compete in the Rolex Fastnet Race and then head to the Mediterranean for a series of regattas including the Maxi Yacht Rolex Cup and the Barcolana before returning Down Under to home and the Rolex Sydney Hobart Race in December.

Witt said SHK Scallywag has been going through a concerted development push this year. “With the exception of the rig, we’ve replaced most of the boat this year,” said Witt. The upgrades include “new rudders, new keel, new boom, new winches, electronics…the only original bit is the rig.”

Witt said that the team’s participation in the 2017-’18 Volvo Ocean Race hindered the development of the super maxi. Time spent focused on the round the world race meant that SHK Scallywag sat idle for the better part of a year. Now with the spotlight again turned on, the improvements have been incremental but noticeable to Witt.

“One problem we’ve had is time,” said Witt, echoing the longest standing frustration in the sport. “One hundred-footers take enormous time to develop and campaign. The Volvo race took us out of the campaign. But the boat’s going better than it ever has. 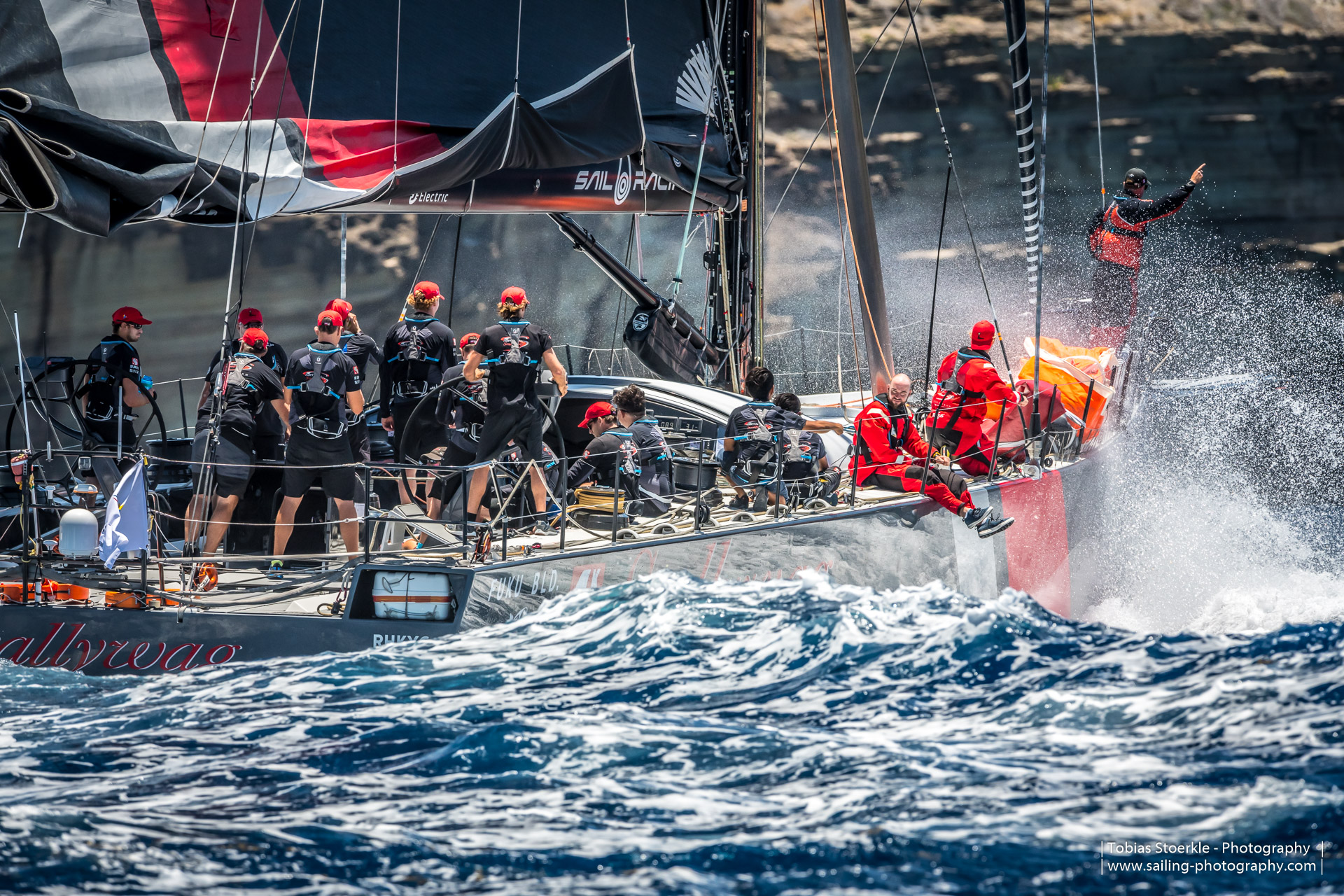 “One hundred-footers are difficult to race, especially transatlantic,” Witt continued. “You have to keep the boat in one piece. We’ve got good guys onboard. We hope to have a good race.”

Witt was aboard the Dovell design when it sailed its first Sydney-Hobart Race in 2015. Witt described the 2015 Hobart as the toughest in a decade to that point. He said they got knocked around in a 40-knot rain squall that put the boat’s structure through a sound testing and he’s confident that SHK Scallywag is up to the challenge of a transatlantic crossing.

“We’ve done the Transpac a couple of times, that’s more than two thousand miles,” Witt said. “We can shorten down to three reefs and the J3 jib in heavy weather. And we’ve got righting moment. There’s a 10-ton bulb at the bottom of the 6.5-meter keel. We also have 6 tons of water ballast, side-to-side. The boat’s done the miles. It’ll be alright.”