Potts, Carina Line Up as Only Three-Time Entrant for Transatlantic Race 2019 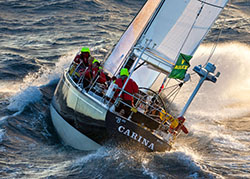 NEWPORT, R.I. — The 2011 Transatlantic Race ended in gut-wrenching fashion for skipper Rives Potts and the adept crew of the fabled Carina. Leading by a comfortable margin for perhaps the first 17 days of the crossing, Carina sailed into a large windless area that allowed the smaller boats that had fallen off the back of the class to come roaring up from behind.

The incident meant that Carina lost out on Class 4 honors by less than an hour. After more than 18 days of racing, of being buffeted and becalmed, soaked and parched, fatigued from too little sleep in a soggy sleeping bag on a soggy bunk, a mere 54 minutes—0.2 percent of their race—is all that separated Carina from another transatlantic victory, and her crew from the memory of a lifetime.

Potts (Essex, Conn.), a Corinthian yachtsman to the bone, took the loss in stride. “We did very well in that race up until a day before the finish, but then we were becalmed for almost a day,” he says. “The boats behind us were smarter than us and went north and avoided the dead spot that we had sailed into. Our hats are off them, they did a great job.”

Carina also sailed the 2015 Transatlantic Race and placed a respectable fourth in Class 4, but did so without Potts, who at the time was absorbed with commitments. A lifelong marine services expert, Potts was busy with a new venture, Safe Harbor Marinas, the largest owner and operator of marinas in the world, as well as his duties as Commodore of the New York Yacht Club, the oldest yacht club in the United States, and a co-organizer of the event.

“Although Carina raced in 2015, I had to sit that one out,” says Potts. “The last race was getting underway just as Safe Harbors was getting going and I couldn’t leave work. It was just too important a time. In fact, Carina has been on the hard since the summer of 2016. I spend upwards of 28 days a month traveling and just haven’t had the necessary time to focus on racing.” 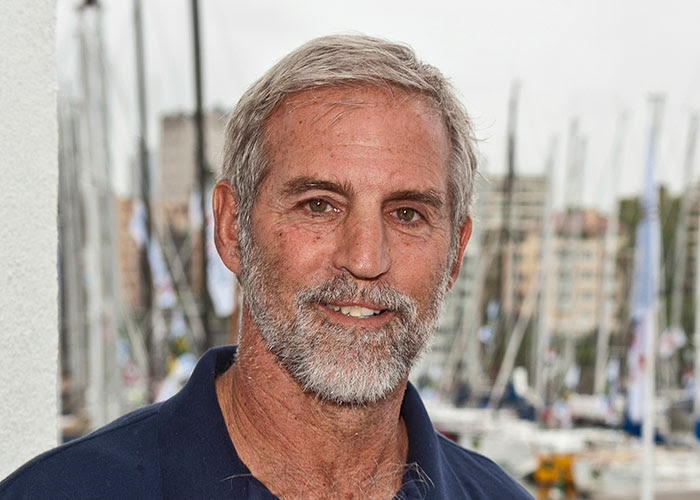 Now, Potts and Carina are gearing up to give it another shot. One of the 64 yachts that raced transatlantic in 2011 and ’15, Carina is the only holdover lined up for the fast-approaching third edition of the race this decade. And this year the well-traveled McCurdy & Rhodes 49 does so as the Grande Dame of the fleet. Drawn in August 1968 and launched in May ’69, Carina will start at least her fifth race across the Atlantic as a 50-year-old beauty.

“I’m very much looking forward to the upcoming Transatlantic Race. It’ll be a big relief and pleasure to get back on the water, that’s for sure,” says Potts, who won the 1980 America’s Cup as a grinder for Freedom and sailed four other campaigns as well. Potts was also a part of Ted Turner's Tenaciouscrew, which won the tragic 1979 Fastnet Race.

The Transatlantic Race 2019 begins in less than three weeks, on June 25, off Newport, R.I., with 15 boats set to cross the starting line off Castle Hill lighthouse. The race is organized jointly by the Royal Yacht Squadron, New York Yacht Club, Royal Ocean Racing Club and Storm Trysail Club, and is a direct descendant of the first great transatlantic ocean race in December 1866. The 2019 edition will be the 31st transatlantic race organized by the New York Yacht Club, and it remains one of the sport’s most enticing challenges.

As a yacht, Carina is very familiar with the challenge. She previously sailed two highly successful transatlantic races under original owner Richard B. Nye, who commissioned the design from McCurdy & Rhodes in 1968. Together with his father, Richard S. “Pop” Nye, they won the 1969 race from Newport to Cork, Ireland, and the 1972 race from Bermuda to Bayona, Spain. The victories were among many registered by father and son Nye on their three boats name Carina over nearly five decades of racing. 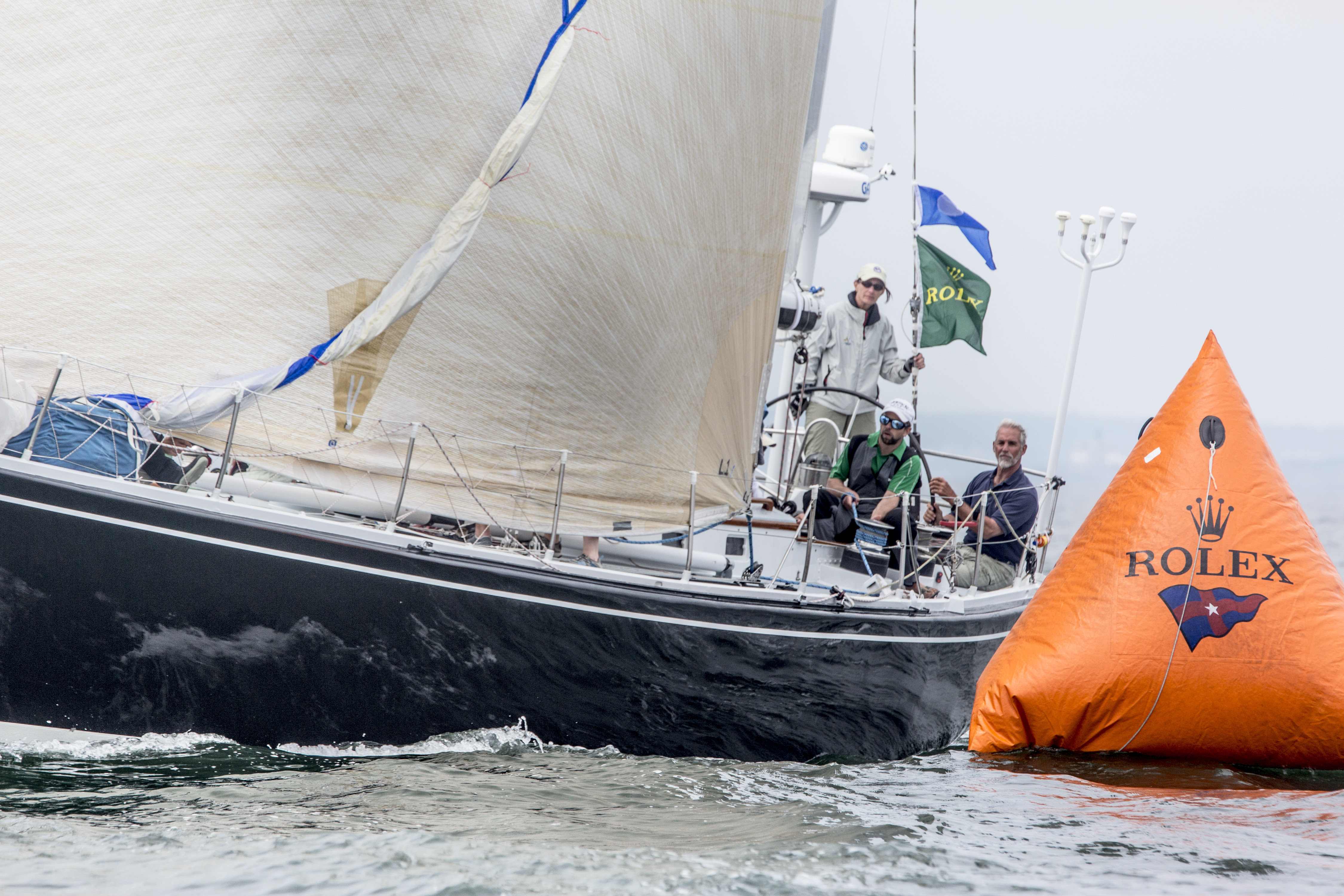 Potts was hand selected by Richard B. Nye to purchase Carina. Potts had been working on the famous black boat since about 1979, when he was at his first marine job at Derecktor’s Shipyard in Mamaroneck, N.Y. Nye then stored Carina with Potts at the Brewer’s Boat Yard in Westbrook, Conn., from the mid-1980s into the 1990s. Regretful that he never had the opportunity to race on Carina with the Nyes, Potts was flattered at the opportunity to purchase the yacht.

“The main reason I bought the boat—beside the fact that I loved her—was that I knew she was a legend and needed a custodian," says Potts, "and I wanted a boat I could sail with my two sons."

Potts is proud that Carina is largely the same yacht as when he purchased her. There have been no major upgrades to make her current. “We put in a new mast in 2006 and have made some minor updates to things like the winches and running rigging, but other than that she’s the same boat,” Potts says.

The skipper returns with many of the same crew who did the previous two races, including watch captains Rich du Moulin (Larchmont, N.Y.), a vastly experienced offshore racer, and Barrett Holby (Warren, R.I.), who owned Holby Marine from 1984 to 2013. They’ll be led by navigator Gardner Grant (Westport, Conn.), who is new to the crew but an experienced short-handed sailor.

For Potts, returning to sea with close friends aboard a well-prepared and proven yacht with a chance at victory is what the Transatlantic Race—and Corinthian yachting—is all about.

“I like offshore racing a lot,” Potts says. “I like getting away from land. Once you're a day out, it’s just a certain feeling of freedom. The stars, unlimited horizon, camaraderie, routine of watch system, unknown weather patterns…it’s a great challenge and invokes the days of yesteryear when Portuguese, British and Italian sailors were exploring the world. There’s kindred spirit there. Except for electronic gadgetry, it’s very much still like that.”