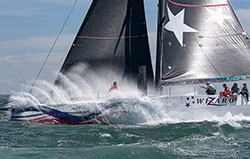 A clear favorite for overall honors and possibly line honors in the upcoming Transatlantic Race 2019 is David and Peter Askew’s Wizard. The canting-keel VO70 will take the starting line next Tuesday with a widely experienced professional crew and a pedigree that is rooted in winning.

“The general rule of thumb is if you’re not fully canted, you’re not winning. Or, you’re not capable of winning,” says 52-year-old Peter Askew of Baltimore, Md. “The boat is very powerful and fast, very wet, but a heck of a lot of fun to sail.”

The 2019 edition of the Transatlantic Race begins next Tuesday, June 25, with 15 yachts set to cross the start line off Newport’s scenic Castle Hill Lighthouse. The race is organized jointly by the Royal Yacht Squadron, New York Yacht Club, Royal Ocean Racing Club and Storm Trysail Club, and is a direct descendant of the first great transatlantic ocean race in December 1866. The 2019 edition will be the 31st transatlantic race organized by the New York Yacht Club, and it remains one of the sport’s most enticing challenges.

Wizard comes into the race as one of the most successful offshore racers in the past few years. After purchasing the yacht in the fall of 2017, the Askew brothers have won class and/or overall honors in the Rolex Sydney Hobart Race, the Newport Bermuda Race and the Caribbean 600. They were equally successful with their previous Wizard (R/P 74), winning the Transpac Race amid several other significant accomplishments.

The 3,000-nautical-mile Transatlantic Race, however, shapes up as the longest race the brothers from Detroit have ever started. And given their lengthy racing careers, that’s a remarkable achievement in itself. They’re both old-time boat captains who’ve made good in business and now are applying their life lessons to their own racing program.

As graduates of the Bayview Yacht Club sailing program, the Askews were deep in the big boat racing scene on the Great Lakes in the 1980s. Peter Askew raced for Bill Martin aboard his series of yachts named Stars & Stripes while David raced aboard a 50-footer named Leading Edge in the heyday of the 50-foot circuit. They would make the winter trek to Florida to race in the SORC, and cover many miles of the Great Lakes in the summers.

“We had lots of opportunities to get experience in ocean racing,” said Peter Askew. “We both ran boats as early as junior year in high school. It was a great summer job. Out of college I was running a Santa Cruz 70 for Bill Martin. I didn’t think the day would come when I’d be running a program like this. It’s a lot of fun, and we take it very seriously. We’re doing this to win.”

In Wizard (above, right, racing in the 2017 Rolex Sydney Hobart Race), they have one of the finest VO70s ever designed. From yacht designer Juan Kouymoudjian, it won the 2011-’12 Volvo Ocean Race as Groupama 4 in what was the final race for the VO70 design. The design is also a two-time winner of the Rolex Sydney Hobart Race, having won overall and Class 0 honors as Giacomo in 2016 before the Askews won Class 0 a year later in their first race in the boat.

Last year Wizard won overall honors in the Gibbs Hill Lighthouse division of the Newport Bermuda Race and earlier this year laid waste to the Caribbean 600 fleet, winning monohull line honors in a time of 1 day and 19 hours, good for a five-and-a-half-hour overall victory on corrected time.

The crew is loaded with round-the-world veterans such as sailing master Charlie Enright (Bristol, R.I.) and Mark Towill (Kaneohe, HI), the duo who have led the U.S. entry in the past two editions of the Volvo Ocean Race. They’ll be joined by navigator Will Oxley of Australia, who navigated Enright and Towill around the world in 2014-’15, and the likes of Richard Clarke (CAN), Joe Fanelli (USA), Rob Greenhalgh (GBR), Phil Harmer (AUS), Robbie Kane (USA), Chris Maxted (AUS), John von Schwartz (USA) and Mitchell White (AUS).

“David and Peter are the best guys you can race for,” said Enright, who won the 2015 Transatlantic Race aboard the 63-foot Lucky. “We’ve got a tight-knit group of guys and the boat is fun to sail, the performance is high. We’ve picked a schedule that suits the boat’s strengths and we’re excited to get going.”

Upon completion of the Transatlantic Race, the Askews plan to enter the Rolex Fastnet Race in August and the Rolex Middle Sea Race in October. Each race is a 600-nautical-mile test in its own right, but Peter Askew is looking forward to the longer Transatlantic Race, if for no other reason than it’s length.

“I really enjoy offshore ocean racing,” said Peter Askew. “The sprints that are 600 miles long are more challenging in terms of the toll it takes on your body. With some of these distances that are greater in length, you get in a rhythm, feel rested and ready to go.

“Some sprint races you don’t get a lot of sleep,” Peter Askew continued. “You get in the middle of the Atlantic and it’s overwhelming. You’re in the middle of nowhere. We have confidence in the people with us. They have lots of miles. We’re in good hands with the group that we have. I’m looking forward to it very much.”