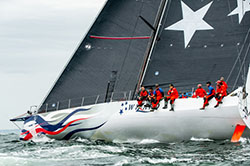 NEWPORT, R.I. — David and Peter Askew’s Wizard (at right) continues to set a blazing pace across the Atlantic, leading the fleet of 12 yachts competing in the Transatlantic Race 2019.

On Saturday, Wizard, the canting keel VO70 that won the 2011-’12 Volvo Ocean Race as Groupama 4, hooked onto a low-pressure system delivering strong southerly winds between 25 and 40 knots, and took off like a bat out of hades.

Wizard put up a 24-hour run of 492 nautical miles between 1230 UTC from Sunday to today. At today’s 1400 UTC position report Wizard had 1,196 nautical miles to the finish in Cowes, Isle of Wight, England.

“We’ve had an awesome past few days,” said navigator Will Oxley. “We’ve been staying on the low. It’s been quite wet and squally. We sailed a conservative plan for a day or two, but now we’re going to back to full noise. The breeze is down to 20 knots and there aren’t any squalls, so we’re able to use the full sail plan.”

“The next challenge is the ridge of high pressure between us and the Lizard,” Oxley said. “There’s a double-stacked high, with one center off the Azores and the other further north. We’re aiming for a spot where we think we can get between the two. The breeze is going to get light but, fingers crossed, we’ll get through to the other side. We’re still looking at July 5 at the Lizard and the morning of July 6 into Cowes.”

Last night Eric de Turckheim’s Teasing Machine and Jean-Pierre Dick’s The Kid cleared waypoint A3, the southeastern corner of the ice zone limit. Today both crews were contending with light, 10- to 15-knot westerlies and jibing downwind to stay off of the southeastern edge of the ice boundary.

Giles Redpath’s Pata Negra, skippered by Andrew Lis, is the next yacht expected to pass waypoint A3 and begin the turn to the northeast towards England.

While the two leaders have had a couple of days of strong winds, the six yachts that make up the second half of the fleet—including Lucy Georgina, Carina, True, Kiva, Hiro Maru and Charisma—are about to sail into their own stormy weather. A low pressure forming to the east of Nova Scotia will engulf them in the coming days with gale force winds.

At 1400 UTC the group was separated by 199 nautical miles, from Peter Bacon’s Lucy Georgina to Constantin Claviez’s Charisma, and sailing along the southern boundary of the ice zone in southerly winds of about 20 knots.

“There’s a low pressure on its way, it looks like we’ll get 30 to 35 knots sustained, with gusts of 45 to 50 knots, mostly from the south,” said Mark D’Arcy, navigator for Hiro Maru. “Hiro Maru is very solidly built and well equipped for those conditions.”

“This race is long, I must say,” Nakajima said today. “We’ve been out here for a week and we’re not quite halfway there yet. I was pretty tired the first three days, but my fatigue is over and everyone onboard is in a rhythm now.”

The strong weather comes on the backside of a glorious day of sailing yesterday, the type of weather that makes racing across the Atlantic a wonderful journey.

“Greetings from midway between Alpha 2 and 3 on a magnificent offshore night,” wrote Kiva navigator Hank Halstead last night. “No moon, but a full Milky Way of stars everywhere except to the west, where low pressure looms. What fun!

“The southerly filled in (Sunday) for a glorious ‘bluebird day’ of power reaching to the Alpha 2 ice gate, which we rounded in 79.5-degree water. No bergy bits here! We’ve learned, once again, to appreciate the isometric aspects of maintaining balance while living in a popcorn popper and are all so pleased to begin reaching through life, once again."