July 2 Update: Transatlantic Race 2019 Leaders Setting Up to Slow Down

NEWPORT, R.I. - For the last three days the frontrunners in the Transatlantic Race 2019 have been striding across the North Atlantic at 20-plus-knot speeds, eating up the miles to Cowes in the strong southerlies - exactly the dramatic conditions and high octane experience their crews signed up for.

Sadly, the big speeds and ‘yeehaa’ moments are soon to come to an end for the two frontrunners, David and Peter Askew’s VO70 Wizard and Lee Seng Huang's 100-foot maxi SHK Scallywag, at least. Already this morning, Wizard’s boatspeed had dropped from 20 knots to 15.

The reason for this slow-down is a ridge of high pressure centred off the west of Ireland that lies in their path. As Wizard’s navigator Will Oxley described it: “Wind speed is dropping, the sky is clearing and the barometer is rising. The sleigh ride is coming to an end and now it’s back to tactical sailing. The trick is to get into the high enough to use its shape to get a nice lift on the exit, while keeping enough windspeed to keep moving. Sometimes it feels a bit like Icarus - making sure we don’t fly too close to the sun (read ‘high’).”

If the wind was dropping for the frontrunners, the opposite was true for the boats some 1,000 nautical miles astern at the aft end of the Transatlantic Race 2019 fleet. Today a front associated with a depression centred just south of Newfoundland was rolling across the tail-enders and bringing gale-force winds.

The group of boats rounding the southeasternmost point of the ice exclusion zone (A3), such as Lucy Georgina, Carina, True, Hiro Maru, Kiva and Charisma, in particular, were feeling the effects of the strongest winds. However, the depression is forecast to move northeast over the next 24 hours with the gale abating, so the mid-fleet should be spared its full force.

While the VO70 and maxi are slogging it out for the lead on the water, there is a similar tense battle between the 46- to 54-foot mid-fleet trio. Here Erik de Turkheim’s Nivelt/Muratet 54 Teasing Machine was just 20 miles ahead of Vendée Globe legend Jean-Pierre Dick’s Verdier 54, The Kid, as she passed the ice exclusion zone’s A4 corner at midday UTC. However, it is currently Giles Redpath’s Lombard 46 Pata Negra which leads under IRC.

Like the frontrunners, this group is preparing for a prolonged period of light winds as they cross another area of high pressure. While a long, slow race was forecast before the crews left Newport a week ago, another round of light conditions is set to further delay their ETAs into Cowes. 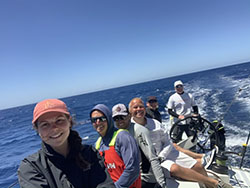 Crews are already wondering if they will have to start rationing food and water soon. As Chris Hanson on Pata Negra reported: “Earlier today Andy and I did a full food audit. This is because there looks to be a high-pressure system building from the Azores to the UK which will be a windless brick wall in our journey. Getting through this looks very challenging and our ETA could go out an extremely long way. A week is a long time in a forecast, but it is very concerning. We’re okay on water... just might be a bit thinner... (who’s moaning!).”

At present leading this IRC 2 group on corrected time is the largest, Clarke Murphy’s Aegir (top photo), but navigator Mike Broughton wondered how long it would last. This morning Aegir was making 11 knots in a westerly wind, while also preparing for light days ahead.

“Our route is looking very north to get around the worst of the two ridges and the big high pressure,” said Broughton. “We will have a difficult day for the next 24 hours because the rivals in our class, over 320 miles back are going to have stronger winds from the south so we will take a few losses then.”

Aside from the racing, there is high drama on board the Rogers 82. “I am getting court-martialed tonight,” Broughton revealed. “There is a cupcake investigation going because four cupcakes went missing and it has turned into a great mystery who took them. I’m innocent, but I may be going down anyway.”