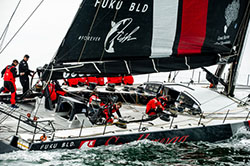 NEWPORT, R.I. — With the Irish coast just 200 nautical miles away for race leader Wizard at 1500 UTC today, the front runners in the Transatlantic Race 2019 might seem to be on the home straight, but there remain many hurdles and potholes ahead before they cross the Royal Yacht Squadron finish line this weekend.

At present David and Peter Askew’s VO70 and Lee Seng Huang's 100-foot maxi SHK Scallywag (top photo) are attempting to find the best way to exit an area of high pressure just off Ireland’s west coast. Once free, the forecast warns of fickle headwinds for the final 160 nautical miles they must sail up the English Channel to Cowes.

Since late evening Monday the tracker has stopped functioning onboard SHK Scallywag. Positions are now being sent through manually from the maxi and at 1500 UTC this showed her having made major inroads into Wizard’s lead. On Monday morning SHK Scallywag had been trailing her rival by around 90 miles. At 1500 this afternoon this had dwindled to 38 miles, although Wizard was making better speed further from the high’s center.

Similarly, astern of the leaders the match race has closed up again between the French 54-footers, Eric de Turckheim’s Nivelt/Muratet Teasing Machine (photo left, to the right) and the Verdier-designed The Kid (photo left, left), skippered by Vendée Globe legend Jean-Pierre Dick. On Monday afternoon, The Kid was some 40 miles astern, but this afternoon at 1500 she had drawn level.

“Conditions are great,” enthused Dick. “We are surfing with a depression coming behind us, and have averaged 15 to 16 knots over the last few hours. We’re enjoying this a lot but the best thing is that we are now very close to our incredible competitor Teasing Machine.” They had been able to see their rivals until this morning when, despite sailing in 20 to 24 knots of wind, fog had set in.

Highlight of the last 24 hours for the crew on The Kid was being visited by some whales less than 10 meters from the boat. “It was a beautiful moment,” recalled Dick. 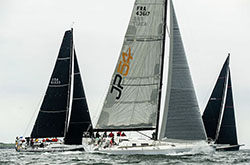 With a sizeable front to the west, Dick was expecting the breeze to build slightly to around 30 knots and he was anticipating they would drop their spinnaker before it hit. Otherwise, Dick observed the usual compression and expansion happening across the fleet. As he came into Teasing Machine, so he expects the smaller boats behind to make in-roads into them as they approach with the breeze.

Directly astern, Giles Redpath’s Lombard 46 Pata Negra is attempting to hang on to the coattails of her larger rivals. From onboard Chris Hansen reported that they currently were enjoying 21 knots of wind from the south, but noted: “The sunshine has disappeared and we are into the grey North Atlantic. The sea is pretty flat, but we have had a nice bit of surfing. We got 18.8 knots out of the boat this morning.”

To the south of the 54s, Pata Negra is in slightly less pressure but steadily averaging 12 to 14 knots. Their concern is not the big breeze to the west, but the lack of it to the east. “Basically, it is going to get very light over the next couple of days.”

The ridge, which this afternoon spans more than 400 miles down the great circle to the Lizard, is what is prompting all the IRC 2 boats to head a long way north. However, according to Hansen, the boats behind Clarke Murphy’s 82-foot Aegir will be able to take a less indirect course to remain in the breeze. This is one reason why Pata Negra has currently relieved Aegir of the lead under IRC corrected time in their class.

Despite being due east of the ice gate Hansen was still wearing shorts, however it had just started to drizzle so the foul weather was being broken out again on deck.

The biggest breeze in the fleet today, as yesterday, remains for the tail-enders, which were still tackling the 25- to 30-knot southerlies from a slow-moving front associated with a depression that over the last 24 has moved slowly north, now centred just north of Newfoundland. 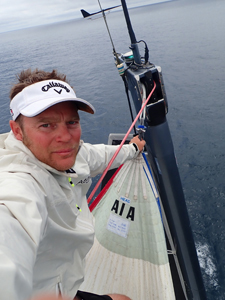 This afternoon Rives Potts’ “good ’ol boys” aboard the venerable McCurdy & Rhodes 48 Carina and Ryan Hughes’ J/52 True were leading the IRC 3 fleet both on the water and on corrected time past the ice exclusion zone’s point A4 after which they will be more or less free to sail their own course for the remainder of the race.

Aegir averted disaster today when the crew discovered the spinnaker halyard strop had chafed to only two strands remaining.

“We sailed for a continuous 48 hours with our A4 (spinnaker) in the air,” said captain Romain Mouchel. “We sent our bowman, Al Fraser (right), to the top of the rig to investigate the reason for the chafing. We have started our own splicing school on board following this incident. Al has been teaching the Murphy girls the basics of whipping/splicing (apprentices ???) as well as making a new lock strop so we could be back to 100 percent and able to peel spinnakers.”