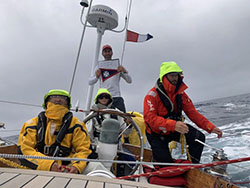 NEWPORT, R.I. - On this July 4, when the U.S. celebrates Independence Day, the spirit of cooperation with “ye olde country” is alive and well in the Transatlantic Race 2019. Co-organized by the Royal Yacht Squadron, New York Yacht Club, Royal Ocean Racing Club and Storm Trysail Club, the race is a friendly reminder of the tight bond that exists between the two seafaring nations. First sailed more than 150 years ago in 1866, this is the 31st race across “The Pond” organized by the New York Yacht Club.

“Our morning opened with playing the Star Spangled Banner, followed by America the Beautiful over the VHF Intercom, music thoughtfully provided by Bob (Langstine) and his iPad,” said Mark D’Arcy, navigator aboard Hiroshi Nakajima's Hiro Maru (top photo). “Chip (Adams) kindly distributed kazoo’s and adorned the mast with both the U.S. and Japan national flags to celebrate the day.”

For those waiting patiently in Cowes, however, all celebrations are currently on hold until the first boats arrive, sometime on Saturday morning. But who will it be? Will it be David and Peter Askew’s plucky VO70 Wizard that has resolutely led the Transatlantic 2019 on the water since Day 2? Or will it be Lee Seng Huang’s 100-foot maxi SHK Scallywag? With an extra 30 feet of length on the waterline SHK Scallywag should be faster, particularly if the two yachts have to beat up the English Channel.

Making predictions is all the harder due to the boats going involuntarily into “stealth mode.” Both boats have had issues with their race trackers and while they are now appearing on AIS, their position updates can be separated by as much as an hour. At 1322 UTC, the last time their polling almost coincided, SHK Scallywag was marginally southeast of her arch-rival, finally nosing back into the lead. At 1500 UTC SHK Scallywag was in the southern Celtic Sea, making 12 knots with some 115 miles to sail to the Lizard gate.

Competing yachts are obliged to pass through this gate that extends 4 nautical miles south of Lizard Point lighthouse. The aim of this is to allow official record times to be obtained for competitors, although any chance of breaking the race’s 6-day, 22-hour record passed last weekend. In fact, the leaders will be hard pressed to better the 12-day, 4-hour record set by Charlie Barr and the schooner Atlantic in the 1905 edition of this race. The forecast is for headwinds in the English Channel, and these are set to drop off overnight on Friday leaving the front runners at the mercy of the Channel’s powerful tides.

Currently having the hardest time in the fleet are those in the wave following the leaders, led by Clarke Murphy’s 82-foot Aegir and including the French 54-footers, Eric de Turckheim’s Teasing Machine and The Kid, skippered by Vendée Globe legend Jean-Pierre Dick. To avoid falling into the windless center of the massive high pressure area that has been blocking their route, they are staying in favorable winds around its perimeter, but this is taking them on a long detour north.

Both Aegir and Teasing Machine are almost up to 52°N latitude, some 250 miles north of the great circle route between the ice exclusion zone and the Lizard. Even on this circuitous route there seems to be little reprieve with the boats likely to shave the southwest corner of Ireland en route south again.

Having the best time in the fleet at present and over the next few days are the back markers. After near gale force winds over the past two days as they reached along the south side of the ice exclusion zone, the front that once pummeled them is now their friend since it has abated and is slowly propelling them across the Atlantic. 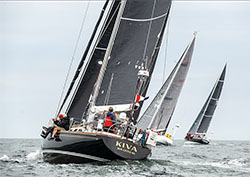 “We are getting on fantastically,” said Mark Stevens, skipper of the McCurdy 49 Kiva (at right). “We have a true windspeed of 15.8 knots coming from 204° and we are broad reaching at 8.5 knots of boat speed in 69.8°F (21°C) water. We are flirting with edges of the Gulf Stream, on a glorious reach, as we did yesterday and the day before. We have even seen some sun.” On their initial encounter with the front, they had seen 36 knots.

“Everybody is fine. We are eating well, we are having a good time,” continued Stevens. “This is the second time we have done this, so we expected it and we just take it as it comes. We are about 1,400 nautical miles from the Lizard, so we will be there in about one week.”

While Kiva is currently south of the great circle, significantly at present it doesn’t seem like the tailenders will have to add miles to their route by sailing the massive detours that the leaders and mid-fleet have.

“We have got these cold fronts that are coming through, which is helping to compress the high pressure system that has been in the way, so I think we will be able to have a nice reach in 10 to 25 knots all the way until we get to the Lizard,” said Stevens, something which will no doubt frustrate the northern boats.

Now mid-Atlantic, the boats may be well away from land but there remains a surprising amount of maritime traffic and even when the conditions aren’t overly brisk there can be alarming moments. One occurred last night on Aegir, when the boat suddenly came to a grinding halt less than a day after they had discovered the spinnaker halyard stop chafing.

“Everyone rushed on deck, some only in boxers and boots and a torch shone on the A2 flying from the top of the mast like laundry flapping on a clothesline,” recounted Murphy. “It all worked out... spinnaker taken down, sent below to a massive packing job, tack strop replaced and by 0130 the spinnaker was back up and we were full speed.”

This time the strop attaching the tack of the A2 had chafed through.

Behind there was similar drama on The Kid when at around 1800 yesterday they lost steerage, which took them around two hours to repair. In the process they lost most of the good work they had done reeling in Teasing Machine. This afternoon they trail their rival by almost 30 miles, although both were making strong progress catching Aegir.