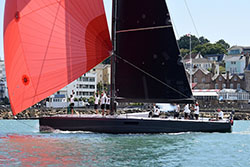 COWES, England — Laurent Pagès stood dockside in Cowes and let out a sigh. Ça va bien, merci, he answered, affirming that all was well after Teasing Machine finished the Transatlantic Race 2019. But it was his sigh that told the story of the crew's languid final days in the 2,970-nautical-mile race.

"The last five days were really tough. Being stuck in high pressure, which was moving with us, there was no way to deal with it," said Pagèsè, the project manager for Eric De Turckheim's Nivelt/Muratet 54-footer. "We had a great atmosphere on board. Teasing Machine is an awesome boat, and the spirit among the crew was very uplifting."

"We're physically fit, maybe mentally exhausted, but that's what it is after a long race. Everything is okay," said De Turckheim, the 68-year-old owner from Geneva, Switzerland. "It wasn't easy because the weather was not kind with us. All the way was really complex weather systems right from the start. I've done three trans-Atlantics and they were all totally unusual. I've never had a good race, downwind all the way."

The complexity of the weather systems began soon after the June 25 start. Pagès said they made a mistake early in the race by making a dive south to keep on the bottom of a low-pressure system. The system though turned out to be lower than expected and they were stuck in headwinds instead of following winds.

"We tried to stay southeast of the low to keep downwind winds, but it was the wrong call," Pagès said. "It was a 50/50 call and a major mistake. When you're not that sure on the tactical call, it's better to stay with the fleet. It was quite a big mistake for us, we lost maybe 200 nautical miles, and then we were stuck between two systems from then on, behind better winds and in front of better winds." 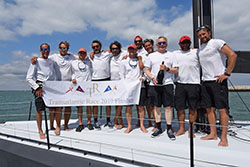 After clearing the southeastern corner of the ice zone limit, Teasing Machine was faced with navigating the ridge of high pressure extending from the Azores north towards Ireland. It was a massive ridge and the only way to go around it was to go north. Far north. At one point, Teasing Machine was above 53°N latitude. In the Southern Hemisphere that would be smack in the middle of the Screaming Fifties. But in the North Atlantic Ocean it was merely the only way around "the ridge."

After descending from the north, Teasing Machine on Monday, July 8 at 1335 UTC, found itself engulfed in the middle of the ridge of high pressure that sucked all of the wind out of the English Channel. The 54-footer was some 110 nautical miles due west of the Isles of Scilly and 314 miles from the finish. It would take the crew the next 72 hours to sail the final distance to the finish at an average speed around 4.3 knots.

"Essentially, it was the complexity of the weather systems," said De Turckheim. "There was nothing hard physically. We never had more than 20 to 25 knots of wind. It was more the complexity and uncertainty of what would happen. Every forecast we downloaded was not what was happening.

"We knew it would be a long race from the start. We had enough food, but ran out of gas yesterday so had no food today," De Turckheim continued. "But otherwise, like any long-distance effort... I've run six marathons and many semi-marathons, you have to dig within your capacity to the length of the race. It's not a sprint. It's a marathon."

Today at 1600 UTC they were essentially bow-to-bow, like two thoroughbreds coming down the home stretch nose-to-nose. They were sailing in following winds around 15 knots and if they were to finish as positioned Lucy Georgina would be the winner of IRC 2. But the tidal currents were forecast to soon turn foul, so there are plenty of minefields to still navigate. 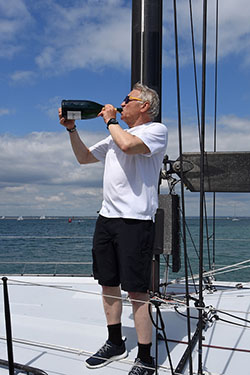 "We're now midway between Start Point and Portland Bill with the A2 spinnaker up gybing downwind with our nemesis of Lucy Georgina!" said Chris Hanson from Pata Negra. "They've done brilliantly since catching us back up a few days ago and we can't shake them off, even after a drifting match around Start Point. We can't figure out how we can get 9 hours back on them so we believe the victory will be theirs and well deserved."

"We have been working very hard to keep the boat moving as fast as we possibly can, and have been successful and persistent at chipping at the gap between ourselves and Carina," said Mark D'Arcy, Hiro Maru's navigator. "At one point we were separated by 90 nm while in the Atlantic and now we are down to roughly 45 nm. We have a lot of racing to do yet, but the crew is excited and eager to put Hiro Maru on the leaderboard."

Meanwhile, atop the Eiffel Tower, Peter Askew's grin grows ever wider. With each passing minute Wizard gets ever closer to winning overall honors in the Transatlantic Race 2019.