(Wednesday, July 8, 2015) – Severe conditions in the mid-north Atlantic have continued to punish the bulk of the fleet in the Transatlantic Race 2015.

Yesterday Daniel and Gretchen Biemesderfer made the decision to retire from the race after their Mason 43 Shearwater suffered mainsail and rigging damage. She is heading for the Azores. Similarly, just before midnight UTC, Carter Bacon’s Nielsen 50 Solution sustained damage to her rudder and was taking on water. She becomes the sixth boat in the Transatlantic Race to retire and is now diverting to the Azores, albeit without electronics, which went down in a previous deluge.

Day 9 Race Report: Gales and Flat Calms in the Atlantic

(Tuesday, July 7, 2015) – Gales and prolonged strong winds since the start have taken their toll as the bulk of the fleet reaches the halfway stage of the Transatlantic Race 2015.

On board the Class 40 Amhas, doublehanded crew Mackenzie Davis and Brian Harris have been forced to retire with mast issues and are currently nursing their Akilaria RC3 towards the Azores.

For those following the YB tracker, there were some nervous moments last night as Daniel and Gretchen Biemesderfer’s Mason 43, Shearwater, appeared to be slowly heading in the direction of the Caribbean. Unable to raise the crew, the Race Committee scrambled Sir Geoffrey Mulcahy’s Swan 56 Noonmark VI to assist. As they closed Noonmark’s crew was able to raise the Shearwater crew, who subsequently sent this update: “We sustained some damage: broken boom vang, traveller and importantly mainsail. We're hove to until the weather abates. At that point we'll decide if we can continue racing. However, the boat is fine and the crew are all well and in good spirits. We're all getting some much needed rest.”

Comanche, Rambler 88, Phaedo3 and Paradox – the four fastest boats in the Transatlantic Race 2015 – are now in hot pursuit of the remainder of the fleet.

Overnight the four have made solid progress with the Lloyd Thornburg’s MOD70 trimaran Phaedo 3 leading, having covered some 307 miles in the first 18 hours since starting. Jim and Kirsty Clark’s 100’ maxi Comanche was already 50 miles astern of the electric green tri, but was leading her smaller rival, George David’s Rambler 88, by 20 miles with Peter Aschenbrenner’s 66’ trimaran, Paradox, a further 30 miles back. This has been in less than ideal conditions, VMG running and having to gybe frequently in a 13-15 knot westerly as they attempt to take advantage of favorable eddies in the Gulf Stream.

“So far it is beautiful sailing,” said Ken Read, skipper of Comanche. “It is a nice way to break into a Transatlantic Race.”

Miles Seddon, navigator on board Phaedo 3, agreed: “We had stronger breeze than forecast getting out of Newport and it has been good fun. It is nice to get offshore and into the routine of racing again.” This morning, Phaedo 3 was averaging 18-20 knots in an 11-12 knot westerly, gybing along the top of a Gulf Stream eddy, while also trying to circumnavigate the top of some high pressure approaching from the south. 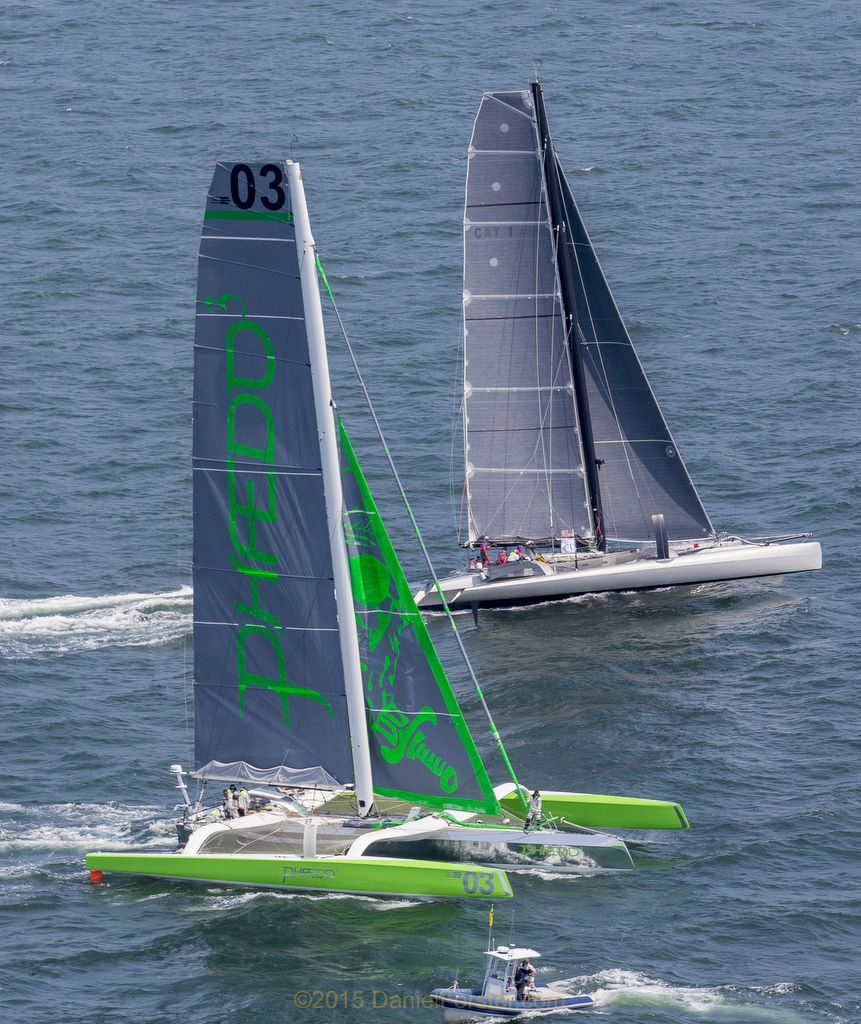 NEWPORT, R.I. (July 5, 2015) – With 2,800 miles to sail and just two boats on the starting line, a conservative start would seem like the smart play. But for the 63-foot trimaran Paradox, owned by Peter Aschenbrenner and skippered by Jeff Mearing, the start of the multihull class in the Transatlantic Race 2015 offered up a wondrous opportunity to throw a little mud in the eye of Lloyd Thornburg’s Phaedo3, the 70-foot MOD 70 trimaran that is the odds-on favorite to take overall line honors in the race. It was too good to pass up, no matter what the overall risk-reward analysis might say.

The starboard end of the starting line was heavily favored due to the straight shot it provided out the channel, so both boats set up off the Jamestown shore for a long timed run on starboard tack. Paradox led into the starting area off the Castle Hill Lighthouse and, with both boats a few seconds late, seemed to be content to cross the line with a slight lead. At the last second, however, Aschenbrenner hardened up and cut off the path of the hard-charging Phaedo3, forcing the larger boat to spin head to wind on the wrong side of the starting line and turn an achingly slow 360, before setting off in pursuit of its rival.

For a race of this extreme distance, such an advantage at the outset means little. To wit, by 3:30 p.m., 90 minutes into the race, Phaedo3 had rolled over the top of Paradox and was scorching south of Martha’s Vineyard on an east-southeast heading at 30 knots. Paradox wasn’t exactly plodding along, hitting over 22 knots according to the tracker, but was quickly losing touch with the competition. Hopefully the early win helped ease the pain of watching Phaedo3 disappear over the horizon.

Day 7 Report: Halfway Back to the Old Country

Skipper Charlie Wroe reports: “The boat and drivers are loving these conditions. Halvard [Mabire, navigator] and his computer have directed us into the south side of this low and we hope to keep this strong wind for as long as possible.

Read more: Day 7 Report: Halfway Back to the Old Country