Grinding is what an athlete does when they don’t have their best stuff.  A baseball pitcher who is working to get outs on a day when he isn’t in top form.  A golfer working to post a low score when she her swing is off just a little.  A sailor trying to get the most out of his yacht when sailing conditions aren’t ideal.

All day long we have been grinding.  The weather has been miserable.  Cold, wet and gray.  The seas have been lumpy, and coming from all directions.  The wind is too strong to put up our bigger sails and go on the attack.  We have to be conservative and cautious at a time when we would like to be aggressive. Ever crew member has commented about how lucky we have been to have only had one day of these conditions so far.

We started out this morning in a triple reefed main and a J4.  We were still shaking off the beating we took last night when we got caught trying to be too aggressive in the wrong conditions.  Early on it we contented ourselves with shaking out one reef at a time to add more power to the sail plan as the wind fell from 30 plus knots in to the high 20s.  By mid afternoon we had shaken out all three reefs.

Despite the weather the crew was in their usual high spirits.  We were moving fast in the strong winds and gaining ground on the fleet.  Our license to surf had been reinstated and everyone took turns on the longboard, reaching momentary boat speeds in excess of 20 knots as they hooked a wave.  Dr. Dave, ably assisted by Henry on main trim, was man of the match with several prolonged rides over 20 knots.  Jeannine, you better get some mainsail trimming lessons from Henry, sailing the Siwicki family Sabre 38, Ava, is never going to be the same now that Lawn Dart Dave has become addicted to surfing.

In line with the forecast the wind has continued to drop and is now at 20-22 knots.  As the wind velocity dropped the velocity of the debate over what to do next increased.  As the debate continued through dinner, night came upon us.  It became pitch black.  Our darkest night yet.  Effectively rendering us blind.  We have a full time radar watch on tonight, Tery and Larry splitting the chores, for both squalls and traffic as we approach the busy English Channel shipping lanes. Underpowered, our speed has slowed to 10-11 knots and Pros pector is lumbering in the sloppy sea.  We need to add more sail area, but are holding off because of our blindness.  We will lose more if we get hit by another squall and go out of control than we will gain by making the change.  We are cheered by every puff to 25 knots and bemoan every lull to 20 knots.  In four hours the sun will begin to rise.  As the sky brightens and our blindness goes away we will put up more sail comfortable that when we do we are not dialing up the risk-o-meter.

The Lawn Dart Dave reference probably requires a bit of explanation.  We have developed our own language out hear at sea over the last 10 days.  It is a poor cousin to DialEck, created by Dennis Eckersley, the Hall of Fame pitcher who is now a TV commentator. Quinn, our head linguist, has developed names for everything.  We have shared some of his sail names with you.  Quinn has promised to put together a Prospector glossary of term so we can save it for posterity and share it with our friends.

A Lawn Dart is a certain type of surfing in which Prospector’s prod digs in to the wave in front of the one she is surfing.  It looks just like a lawn dart arcing back to the ground.  At first it is kind of terrifying.  You have a 32 thousand pound, 60 foot yacht pointing straight down the face of one wave in to the back of the wave in front of her.  Prospector is pitched at roughly a 45 degree down angle, picking up speed seemingly headed for certain disaster.  Think of the poster for the movie The Perfect Storm and you will get the picture.  But because Prospector is such a gem, the disaster never occurs.  As the prod digs in to the wave in front, with sea water flying everywhere her bow gently lifts and she hurtles forward on the energy provided by the wave behind her.  Once you get over the initial visual shock, it is massive fun.  During his epic surfing session today, Dr. Dave was regularly throwing lawn darts.  Hence his new nickname.  Jeannine, you might need to retire Sparky! 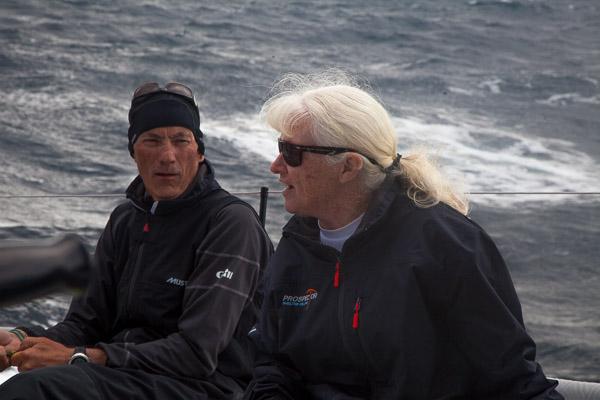 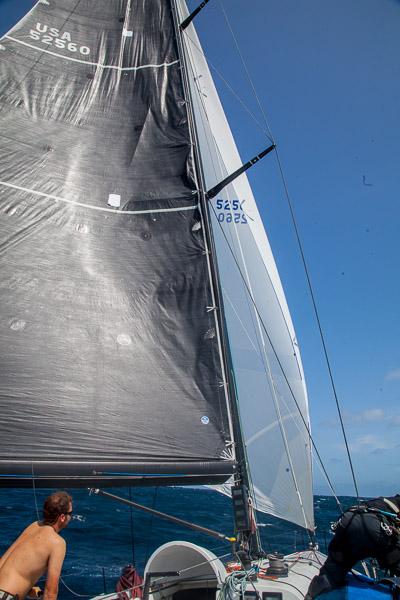 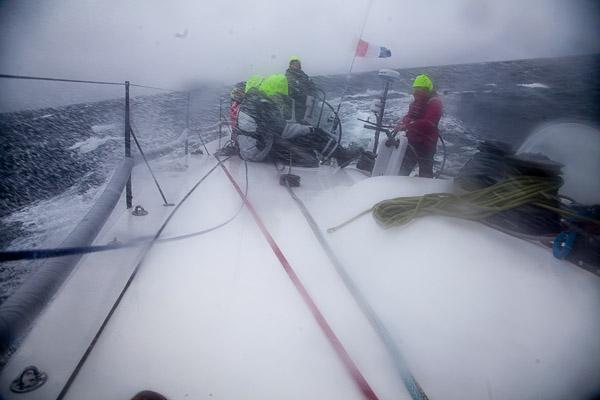 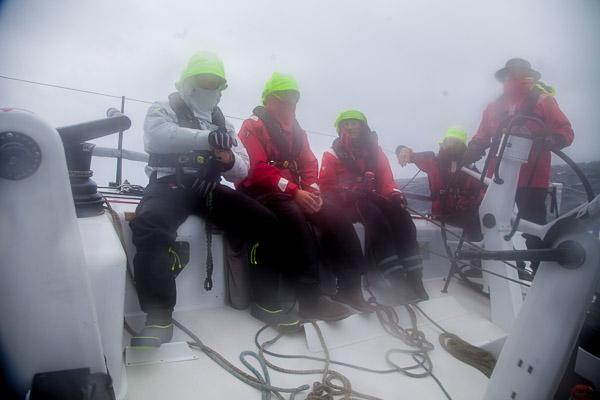