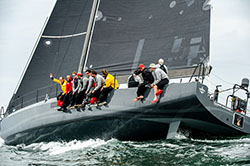 NEWPORT, R.I. — The conditions on the open Atlantic Ocean are far from white knuckle, but the tactics playing out in the Transatlantic Race 2019 are never more interesting.

It’s perhaps due to the lack of screaming conditions that the action is so compelling. Rather than dodging waves and squalls, the fleet is scampering around light patches while setting up for the effects of the Gulf Stream.

At the head of the fleet the supermaxi SHK Scallywag, skippered by Australian David Witt, seems to have sailed itself into a corner from which returning is going to come at a hefty price.

At today’s 1530 UTC position report, some 48 hours after the race start, SHK Scallywag was about 170 nautical miles due west of the waypoint A2 marking the southwestern corner of Point Alpha, the ice limit zone. SHK Scallywag was 146 nautical miles north of Wizard on a bearing of 338, but was making 14.6 knots boatspeed on a heading of 156 degrees.

That has put David and Peter Askew’s Wizard, the Juan Kouyoumdjian-designed VO70, into the virtual lead on the water. Wizard is south of the rhumbline sailing at 15.1 knots on a bearing of 106 degrees in south/southwesterly winds around 10 knots. Wizard, however, is far from in the clear as the crew attempts to slither between two patches of light wind.

June 26 Update: Transatlantic Race 2019 Comes Off as Straightforward as Possible 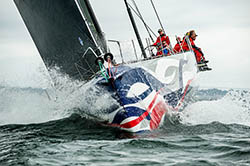 NEWPORT, R.I. — Few things are straightforward when racing across the Atlantic Ocean. There are safety concerns at every turn, from storms and lightning threatening everything above water to unseen floating objects (“UFOs”) threatening the parts underwater.

Contrary to that theory, the 13 yachts participating in the Transatlantic Race 2019 have had surprisingly straightforward conditions in their first 24 hours at sea.

“The first night was fairly easy,” said David Askew, co-owner of the VO70 Wizard (top photo). “We’ve been close reaching in 18 to 20 knots of wind from the south and making 13 knots boatspeed.

“The weather has been very nice,” Askew continued. “We had light rain on and off all night. This morning it cleared and has stopped raining. The breeze has been very steady, we’re even seeing patches of blue sky. It’s also been warmer than most everybody expected.” 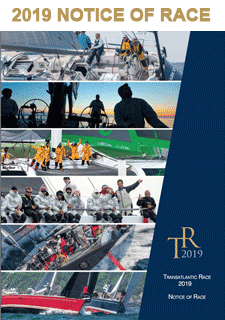